Hot Shot is a 'pinball' type game where the objective is to land the ball in a series of coloured buckets with different values attached to them. The player bets on which bucket the ball will land in by placing stakes onto the respective buckets colour. Pressing shoot will launch the ball up the shaft of the playing area where the ball will eventually fall through a series of pins placed in order to scatter the trajectory of the ball, varying where the ball will land. As the ball is in flight, the different coloured buckets move on-and-off screen coming in from the right and disappearing to the left in a conveyer belt-type movement, further varying the destination of the ball. 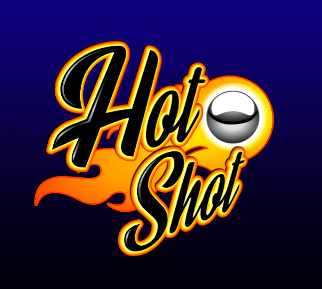 The values of each bucket are as follows:

Once the game has loaded up, the player will be presented with the game screen. In order to start the game, simply select stake and press 'shoot'. This will engage the game. 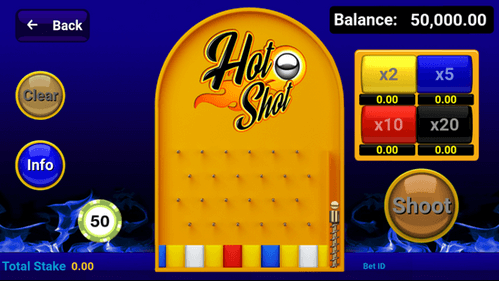 Players can select their stake, represented as poker chips, by choosing the value of the chip from the list beside the coloured squares. Once players choose their chip value, they can place them on any given bucket by pressing the coloured squares. The player has the option to stack chips in order to increase their bet on any given bucket. The value of the bucket determines how much the player will win if the ball lands in that bucket.

Player's total stake is represented at the bottom left of the game screen, with 'total stake' displaying the accumulated total value of all chips placed on the coloured squares.

When pressed the clear button removes all stakes from each coloured square returning the total stake to 0.

The Theoretical % RTP (Return To Player) for HotShot is RTP AS PERCENTAGE 95.23% .