The Sky Pirates slot machine is a thrilling Pirates – themed slot containing five (5) reels and thirty (30) pay lines. The symbols in the reel's slot machine are Pirates themed, like anchor, guns, telescope, parrot, and compass.   And also, the Ace, King, Queen, Jack, 10 and 9 are of pirate design. 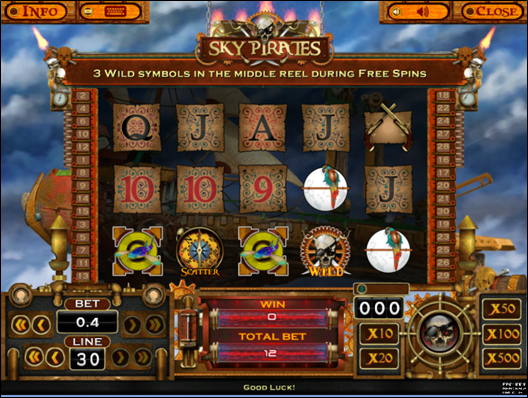 The game has a Gamble Game option, featuring the Captain with the two treasure chests. It can be played when there is a certain winning combination as a result of the original spin. The game also features the Swarm Captor Bonus Game that can be triggered if two bonus symbols appear on slot reels 1 and 5 respectively during the “Free Spin” slot game scene.