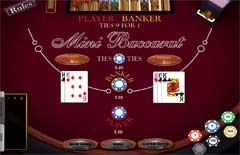 Mini-Baccarat is a faster version of the card game Baccarat (also called Punto Banco in some areas of the world). The object of the game is to bet on whichever of two hands, the players hand or the bankers hand, that the Player thinks will have a point value closest to 9. The Player can also bet on a tie.

Over a long period of time, the game is likely to average a return to the Player of 97.62% of the total bets made.

To place a bet, the Player moves the cursor to the pictures of the chips in the lower-right corner of the game window and left-click the chip value that they want to use. The Player then moves the cursor to the Betting Area on the table layout marked players or bankers and tie, then left-clicks to place their bets. The chip will automatically appear in the betting circle, with the total value of the bet written alongside. The bet amount will also appear at the top of the window.

Note that the Player may place a bet on the tie by placing a bet in the area marked TIE.

Each left-click will increase the bet value by one chip of the same value, up to the maximum bet for that table. If the Player wants to use a different chip value of this bet, they must move the cursor back to the pictures of the chips at the lower-right corner of the game window on the screen and left-click on the new chip value that they want to use. Then the Player must move the cursor back to the Betting Area on the table layout, and left-click again to increase the bet.

As soon as the Player has placed their bet(s), they must left-click on the DEAL button to commence play. The system will automatically deal two hands of cards, which are called the players hand and the bankers hand. All cards are dealt face up. The cards will be drawn in the following order:

More than three cards can never be drawn for either hand.

The hand with the highest point value wins. All losing bets will be collected and all winning bets paid. If a bet is a winner, the winnings will be posted to the credit balance and updated in the credits display upon selecting the next game or upon returning to the Lobby.

If both hands have the same point value, that game is a tie and neither side wins or loses. In this case, tie bets win, but players and bankers bets do not win or lose so the bet is refunded back to the Player.

When the hand is finished, the NEW GAME button in the game window on the screen will illuminate. Left-click on this button to begin the next game.

Some common Mini-Baccarat terms are provided below, complete with explanations.

Payouts are determined at standard odds that you will find to be identical to those used in all of the major Casinos of America, Europe and Asia.

Winning players bets receive payout odds of 1 to 1 (even money).

Winning bankers bets receive payout odds of 1 to 1 (even money). However, a commission equal to 5% of the win amount is deducted automatically.

Winning tie bets receive payout odds of 9 for 1. If there is a tie, bets on the bankers or players are returned to the Player.

The maximum and minimum bet limits will only be displayed within the Gaming Rules Menu of this Game after the Player has logged in.

All cards except for Tens, Picture Cards, (Jacks, Queens and Kings) and Aces, are worth their face value.

All Tens and “Picture Cards” are counted as zero.

Aces are counted as one.

There are no optional drawing rules in this game. Whether cards are drawn or not is determined automatically by the system according to the rules provided below. These rules are called the “Drawing Rules” or “Tableau”, and are identical to those used in all of the major casinos of America, Europe and Asia.

The decision to draw a third card for the players hand is made automatically according to standard casino rules as below.

If a third card is drawn for the players hand, the decision to draw a third card for the bankers hand is made automatically according to standard casino rules as below.

View article in other languages: